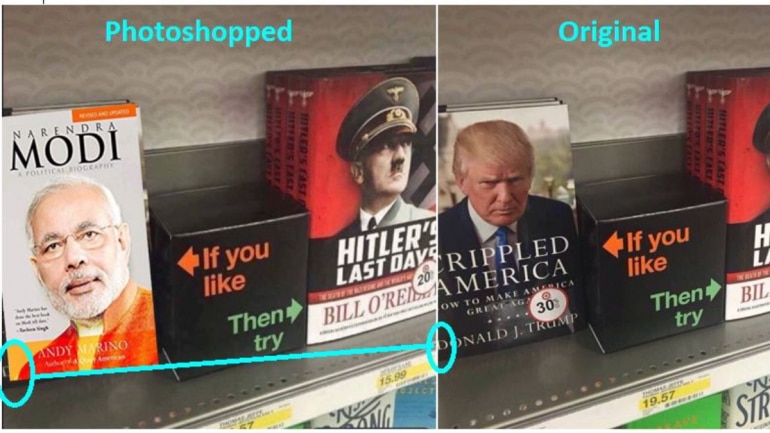 A picture has gone viral on social media suggesting that if you like a book on Prime Minister Narendra Modi, then you should also try a book on Adolf Hitler.

The viral picture shows a sign If you like’ pointing an arrow at the book on Modi, followed by Then try’ pointing another arrow at the one on Hitler. The price tags of the books can also be seen in the photo.

Twitter user Ashish’ tweeted the picture and claimed that he saw it at Mumbai airport. Till the filing of this story, the post was retweeted more than 1,200 times and loved’ by over 2,800 users.

India Today Anti Fake News War Room (AFWA) has found the picture to be photoshopped. The original picture is at least three years old in which Crippled America’, a book written by United States President Donald Trump, is seen along with the book on Hitler.

A simple reverse search revealed the truth behind this viral photo. In September 2016, verified handle The Poke’ tweeted the original image which shows the cover of Trump’s book instead of Narendra Modi: A Political Biography’.

We couldn’t ascertain when and where the picture was taken but it is clear that the viral picture is morphed.